Thirty four years ago, I had just started my first marketing agency and within a few weeks I had a call from one Paddy O’Farrell. Paddy was running sales and marketing for a small division of Ericsson at the time and was looking for marketing help. I remember the phone call because I was in Stoke-on-Trent in Staffordshire, Paddy was in Coventry. He asked me how long it took to drive between the two places. I told him and he said, “I’ll see you in an hour and a half then.” No ifs, no buts. We then worked together for six years before he left Ericsson and life took him in a completely different direction. We had become good friends during that time but, as so often happens in the craziness of everyday life, we lost touch. I think we last met at his house in 1990 and for the last 13 years he has lived with his wife, Fay, in Malaga.

The point of this narrative is that Paddy and I connected on Facebook a while back and when he read that I was planning a cycling trip to Spain he asked if I would be anywhere near Malaga. I wasn’t going to be and in any case Paddy was holidaying in Tenerife during my trip. When I decided to come to Tenerife, I got in touch and we agreed to meet for lunch yesterday (Monday), together with Fay, their son Antony and Antony’s partner, Lisa. Hence my assault on El Teide would wait until Monday.

Before lunch, I took a short ride the check out the bike, after taking it out of the box and putting various bits back together because it had been partly dismantled. Traffic was busy and on far too many occasions drivers were either inconsiderate or downright dangerous. I really can’t recommend Tenerife as a place for cyclists, despite the climate. My experience of France, mainland Spain and even the UK has been infinitely better. Nevertheless, I managed a loop of twenty-odd miles without serious injury and felt that this was enough to put me in good shape for the next day’s challenge.

Lunch in the little port of Los Abrigos was delightful with great food, great conversation and modest consumption of wine. I had wanted to tell Paddy that Ericsson remained a client for 33 years, until the end of 2017, at which time the division in question was sold to another global company called Flex. Despite that, Flex immediately hired our agency to continue the work. Paddy’s phone call to me in 1984 had initiated a business relationship that has lasted 34 years and picking up the bill for lunch was the very least I could do to thank him. 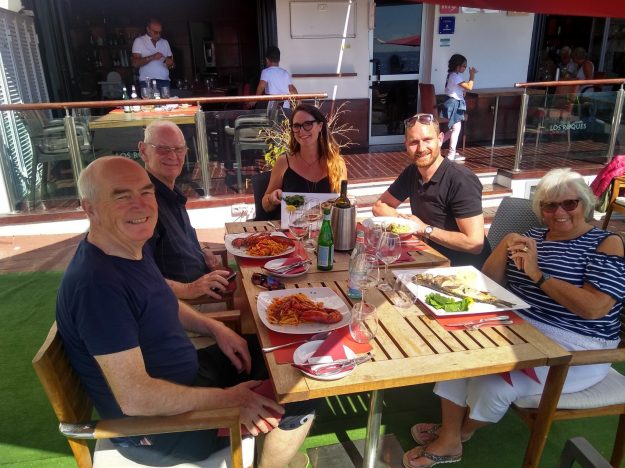 Lunch with Paddy, Fay, Antony and Lisa. The best possible start to my brief trip to Tenerife.

I set off to climb El Teide at 7:20 this morning, while it was nice and cool. After ploughing through Monday morning traffic near the coast, I went through several small towns and, because I took the most direct route offered by Google Maps, ended up on one stretch of road that was so steep I could not turn the pedals and had to push the bike for about 500 metres. I thought to myself that if the whole route was going to be like this, I’d never make it. My fears were unfounded though and I soon began to settle into the climb, reaching an approximate mid-way point of Vilaflor at about 10:30. I refuelled there with a sandwich, apple tart and water, rested for about 20 minutes and then set out to do the last and most testing 25km of the climb along TF-21. I saw a few other cyclists, mostly brief glimpses of their backs, and pushed on slowly through the pine forest. It was reminiscent of Mont Ventoux. Of course, it was tough going but no more so than I had expected. The scenery was breathtaking, as was the oxygen-depleted air. There was absolutely no risk of rain because the clouds were below me. I don’t know of any recorded incidence of clouds raining in an upwards direction, but I’m sure someone can enlighten me! 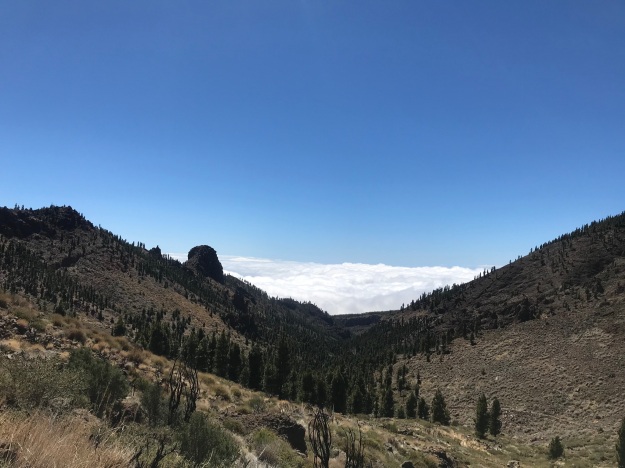 Keeping the clouds beneath you avoids the risk of rain

The peak of the climb arrived suddenly and earlier than expected. I passed a sign for “El Teida” but it’s a national park, not a precise point on the map. In retrospect, I think I could have turned around and gone home at that point, my goal achieved but I kept going and there was a long descent into a kind of valley followed by a climb up to the park’s visitor centre. 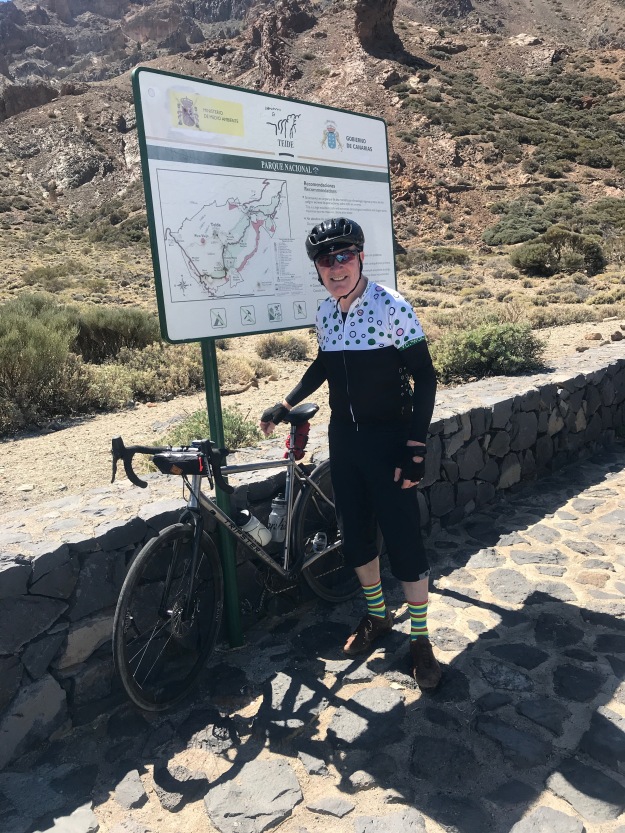 Arrival! The “lucky” socks were chosen for me by my daughter, Matilda, obviously without knowledge of VC Walcot´s club jersey colours!

I chatted with a couple of cyclists from the north east of England. They thought that we had topped-out by this point so I turned around and headed back the way I had come, including climbing back up the long descent I’d enjoyed less than an hour earlier. 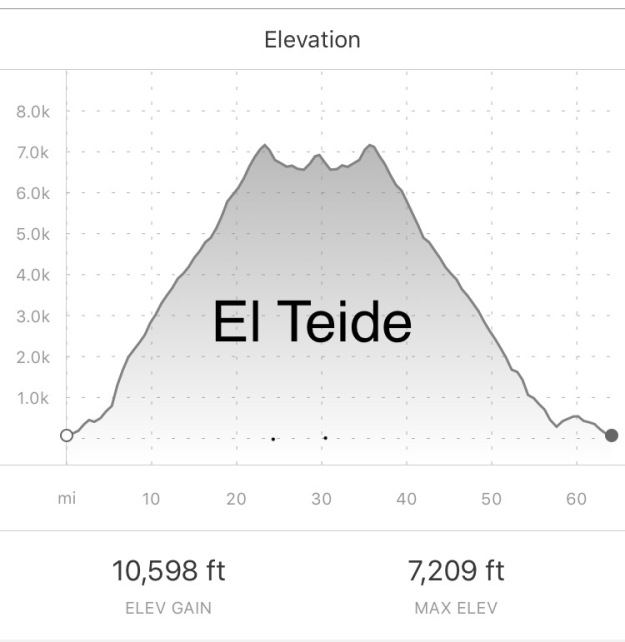 I strayed from my intended route on the way back down and added a few kilometres to the ride but with my target achieved, it just didn’t matter. I arrived back at my accommodation at 16:20 having covered a total distance of 64.1 miles and climbed 10,598 feet, most of it in half that mileage, of course. My average speed was a miserly 8.9mph but I was pleased with that under the circumstances.

Dinner tonight is at Chez Paddy, with Anthony doing the cooking. I’m sure it’ll be the perfect end to this trip.