It’s Tuesday evening and I’m sitting in my hotel room in Seville, having wandered around the city looking for a small Bluetooth keyboard for my iPad. The original decided to die sometime between the last time I used it – some months ago – and when I arrived into Faro, hence the lack of blog post for two days.

My first major concern for this trip was how to get the bike over safely. I do have a nice, sturdy bike box for airline travel. I didn’t have anywhere to put it if I’d brought it to Faro. I decided to resort to putting the bike into a big plastic bag so that baggage handlers could see what it was. Online opinions about the wisdom of such packaging vary from “it’s always worked for me” to “you have to be out of your tiny mind!”. The latter was from an ex-airline pilot, so he should know. Anyway, the upside of the plastic bag transport system is that you don’t have to disassemble the bike very much, so it doesn’t take long to put it back together. The task is made even easier at Faro airport because the baggage reclaim area has bike reassembly stations – two in the case of the one I flew into. These each consist of a bicycle stand, pump and pedal spanner. I had padded the bike with foam sheets and pipe lagging, held together with reusable cable ties (they them, they’re really good), and it arrived totally unscathed from the journey. I put all the packaging in the bin at the airport and now just have to figure out what to put the bike in to take it home when the time comes.

Bike in a bag – the only way to travel 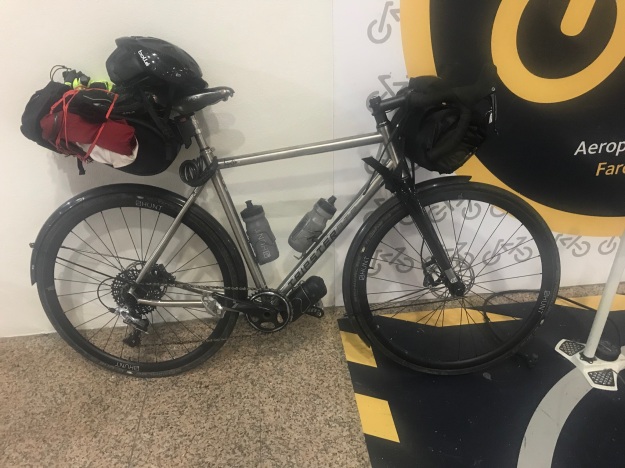 After getting everything loaded up – and I really can’t understand how the bags came to be so heavy – I rode the short distance to the 3K Hotel on the aiport, grabbed something for dinner at the adjacent supermarket (the hotel restaurant was closed) and had an early night. 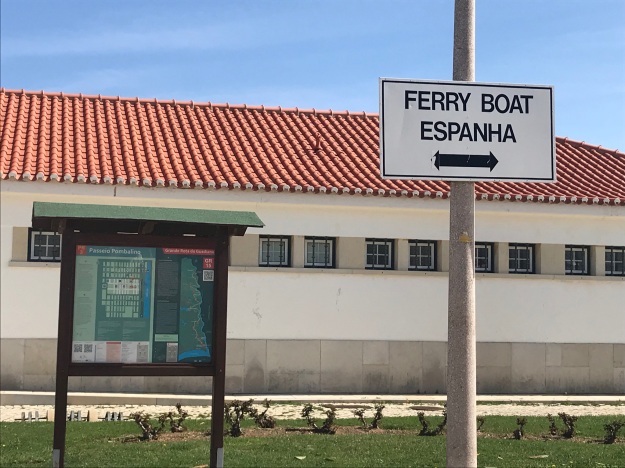 I set out off at seven-thirty, rode through Faro and tried to locate a coastal cycleway that’s rumoured to run to the Spanish border. Along the 50 miles or so to said border, I encounted the route a few times but kept ending up back on the N125, the signposts for the cyleway being less than adquate. The landscape was mostly flat, I had a tailwind to push me along and for the most part, the cycling was reasonably easy. There were flamingos in the coastal lagoons, guard dogs barking from behind mesh fences at many of the more rural properties, orange groves a-plenty, and graffiti in even greater abundance. I spotted the ultimate confusing sign while searching for the ferry in Vila Real de Santo António to take me across to Spain.

After a short and uneventful crossing, I carried on heading east, deciding to go north around the industrial city of Huelva to avoid the worst of the traffic and main roads.

I arrived at my small hotel in San Juan del Puerto (a town that has little to commend it) around five-thirty in the afternoon, having covered about 95 miles, the last fifteen of which were becoming hard work, not least because I thought the journey was only going to be 80 miles but there was a miscalculation somewhere. The Hostal Toscana was clean, the welcome warm, the restaurant non-existent. I found a bar close by and finished off the day with chicken and chips and a couple of glasses of fine Rioja.

Today, knowing that I only had 50 miles or so to cover, I luxuriated in a late breakfast at a cafe across the road from my hotel. I then took the A472 to Sanlúcar la Mayor, about 20 miles west of Seville. The A472 was a delight. It’s a quiet road because it runs parallel with a motorway, so there’s little heavy traffic. There was a wide shoulder to ride on for most of the way and it was free of the gravel, broken glass and road-kill that so often blights these lanes on British roads. The long ascent up to Sanlúcar la Mayor gave me a taste of what’s to come as I head north tomorrow. With a heavily laden bike, I was into my lowest gear and wishing I had a few more that were lower still. I know that there will be many similar climbs in the coming days.

Light traffic but cloudy skies on the A472 to Seville

Both yesterday and today, rain was forecast but didn’t materialise. Yesterday was quite cool, I guess around 14C, but today reached 20C and the sun even came out for a while as I approached Seville. I took a stroll around for a couple of hours and finally managed to find a replacement keyboard for the iPad. That’s what I’m typing on now. However, it’s a Spanish one with several of the keys in different places from those on a British keyboard. Add auto-correct to that and I’m almost certainly writing more rubbish than usual!

Seville is beautiful and a few iPhone photographs can’t do it justice, but here they are anyway. 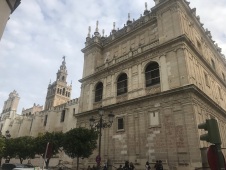 Two days, 153 miles, and no rain. I’ve only had to swear at cars twice. And I’ve not yet had to resort to universal digital signage. Tomorrow I turn north to find the Ruta de la Plata, or Silver Route. The ancient pilgrimage and commercial path runs parallel to the N630, which will take me all 807km to my destination of Gijón on the north coast. My best guess is that I’ll arrive a week from today, but who knows what’s in store along the way?