This was supposed to be an easier day. We had 100 miles to cover on the Canal du Midi cycle path, heading almost due east. We had a northerly cross wind in the morning but it was forecast to turn westerly in the afternoon, creating a helpful tailwind for the ride.

In the end, it turned out to be as tough as the previous day. We both had big dips in energy along the way, Richard’s coming early in the ride, mine much later. As soon as we left Toulouse, the cycle path deteriorated into something more like a mountain bike trail and not only did this bring our average speed down to single figures in mph, but it shook us about on our rigid road bikes and required a lot of concentration to avoid tumbles.

Despite this, we felt we made reasonable progress and stopped for coffee at a converted lock keeper’s station along the canal. We sat outside in warm sunshine and it was apparent that we were now in the south of France. We then set out again but the cycleway progress was slow – it was just too rough. We stopped at a lovevly restaurant and had pizza for lunch. It’s great cycling fuel. We were chatting to a French couple next to us who had moved to the area from Paris just two days earlier and time flew. I guess we must have been there for an hour and a half, but we were unconcerned about time.

As soon as we set out again, we knew we were going to have to up the pace as the canal path surface deteriorated again. Richard then had his third puncture of the trip – he now leads 3-1. It set us back another 30 minutes and we headed off once more. 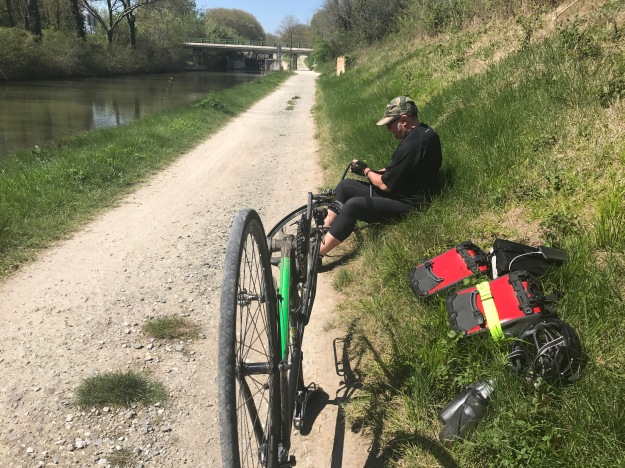 At this point we met a French family on British made Genesis expedition bikes (Croix de Fer models). The father had a trailer to carry the couple’s daughter, who was perhaps two years old. His wife’s bike was fully loaded too, and their luggage included campaign equipment. They had set out two days earlier from Toulouse and were on their way to Norway via Italy, Switzerland, Germany, Holland and Denmark. This was to be a six-month trip and it made our little challenge seem easy.

We decided to turn back and find a road route, abandoning the canal path. We ignored the first ‘route barre’ sign we came across – something which normally means you have a traffic-free section of road to ride on and can then squeeze through a gap somewhere at the end with a bicycle. We made a wrong turn at one point and ended up heading down a cul-de-sac where the house at the end was guarded but two barking dogs. We’ve seen dozens of guard dogs behind fences on our trip, but these were not fenced in and started to charge towards us. Our ride is recorded on our GPSs and i think when we analyse it, we’ll find our time for the 400 metres or so after the dogs headed our way will qualify Richard and I for the next Olympics. I’ll write to British Cycling.

Escaping without in jury, we then found the road to Narbonne via Carcassone, the latter being about 15 miles away. We switched on Google Navigation and got through Carcassone but just as we were leaving the city, we spotted the French family beside the road and gave each other a wave. How they got there ahead of us with a trailer in tow, we’ll never understand or find out!

The road was now busy and only a narrow white line separated us from the traffic thundering by, some of it uncomfortably close. We pushed on through the last 40 miles making good speed with the promised tailwind and there were only two diversions from the D6113 indicated by Google. The first of these led us along a lovely country lane through Crobier vineyards but then dumped us an impassable 800m rutted and wet track. We had no option but to wheel the bikes between rows of vines hoping that the owner did not let his dogs loose – we could hear their frenzied barking behind us.

Google doesn’t distinguish between a road and this

A final push and we arrived in Narbonne just after 9pm. Another pizza,  accompanied by desert and wine this time, and we were done.

We’d covered 103 miles putting us 10 miles ahead of our 700 mile target for the end of the seventh day of our trip.