Last year I bought a restored A.S. Gillott frame from a dealer in South London. It has one or two very minor marks from where it was packed for delivery, but it’s pretty near perfect. A 1948 model, it may well have been built by Ron Cooper, who worked for Gillott, and I know that Ron was involved in its restoration, replacing one of the drop-outs. 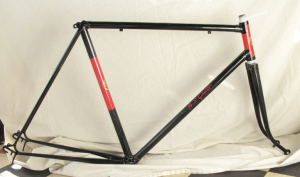 What I didn’t realise until the frame arrived was that the dropouts were designed for an Oscar Egg “Osgear” set up. It’s not possible to fit a conventional derailleur freewheel or cassette. I decided to make it a single-speed bike and found a nice pair of Charge track wheels, the rear one of which had a flip-flop hub, so I was able to build up the bike to be ridden either as a fixie or with a single-speed freewheel. 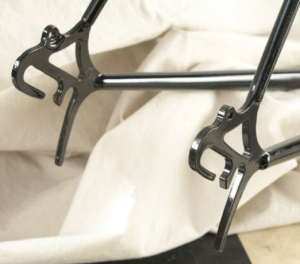 Oscar Egg dropouts are only suitable for Osgear, single-speed or hub gear set up

I decided that this was going to be my prettiest bike, so matched the brake and gear cables to the red of the decals and even bought a red and black saddle to complete the work of art. Looks lovely….rides like a shed on wheels!

I think the problem is partly the razor sharp saddle (back to a Brooks B17 any day now) but also the geometry of the bike. I haven’t measured it but the top tube seems particularly long. I feel like I’m stretching over the bike, even to ride on the tops of the Cinelli drop bars. And my feet feel as though they’re too far forward, wherever I position the saddle. It’s time to try a new set up – one that will make the bike as good to ride as it is to look at.

The Gillott frame with as a single-speed set up with flip flop hub. Very pretty, note the glossy bar tape, but strange to ride!

Having appreciated the joys of Sturmey Archer hub gears last year, when I road my Thanet Silverlight with a 1949 4-speed hub from Barcelona to Bristol without a hitch, and inspired by the sight of the restored Bob Jackson bike mentioned a couple of days ago, I’ve decided to rebuild the Gillott frame.  Even though you have to stop pedalling for a second to change ratios with internal hub gears, each change is precise, silent and perfect – not like the rather crude process of dragging a chain across a bunch of sprockets to end up with yet another imperfect chainline. So the frame will be fitted with a Sturmey Archer S-RF5(W) 5-speed hub in the rear wheel (with a downtube shifter as a nod towards vintage styling), a B17 saddle and either a Mary bar or Mungo bar from On-One.  The bars are on offer at the moment and are so cheap I decided to buy both and try them out. The Sturmey Archer was chosen because Shimano hubs and others aren’t suitable for the relatively narrow dropout spacing of vintage bikes (125mm OLD). This combination should give me a lot more flexibility in setting up the bike for greater comfort, and make it practical for commuting. I’ve bought a couple of 27 x 1 1/4 wheels, which is the size the frame was originally designed to accomodate, and I’ll rebuild the back one with the new hub – that was a cheaper option that buying a pair of rims, a front hub and all new spokes.

The bike in 5-speed form will appear here soon….if all goes well.

3 thoughts on “The joy of hubs…my next project”